The organizers of professional women's golf tournament AT THE DALAT 1200 2016 held a press conference with journalists at home and abroad eve of the tournament takes place. This is a female professional golf tournament organized by the Association of Korean women's golf, women's golf clubs and private resort AT THE DALAT 1200. League place from 22-27 / 3, bringing together 120 golfers professionals from Korea, Taiwan, Australia, Singapore, Hong Kong, China and Vietnam, with a total value of competing on 42000 USD prize money.Known here as the first female professional golf was held in Vietnam; through it as an opportunity to introduce promotional Dalat City - Lam Dong Province, one of the "52 attractive destinations in 2016" published by the New York Times. Known channels will be broadcasted live SBSTV this tournament five hours a day on 5 Country and broadcasting in 8 other countries. 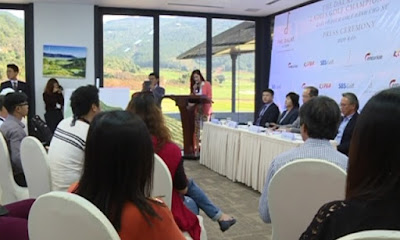 Posted by Unknown
Labels: sport
Email ThisBlogThis!Share to TwitterShare to Facebook
at 5:54 AM